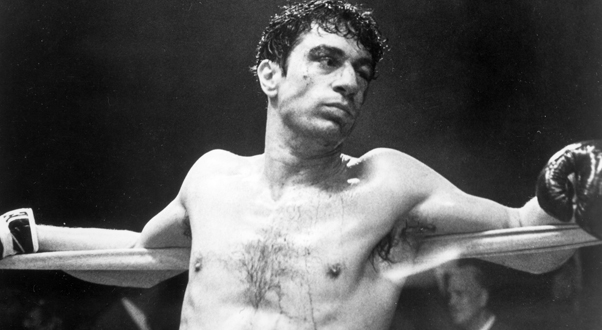 Listen to me carefully because I’m only going to say this once — there has never been a better acting performance in the history of motion pictures than Robert De Niro’s performance as Jake LaMotta in Raging Bull. Go ahead and think of one…I’ll wait. Are you done? Good. I’m glad we agree and it is settled.

Clearly De Niro became Jake LaMotta for two hours. He inhabited him like a soul and delivered unto film the most awe-inspiring, raw and powerful performance of all time. You truly can’t take your eyes of the screen during the film. When you look into De Niro’s eyes you feel the pain and fear and insecurities of the man and you explode with emotion just as he does whether it’s in the ring or in his personal life. LaMotta’s self-doubt turns to raw energy and it becomes the force that enables him to tear men apart in the ring, but when it’s over you feel sorry for LaMotta rather than his opponents because he is still not satisfied with what he has done. I wonder how a person can have so much yet need so much more?

Everyone knows the story of how De Niro became Jake LaMotta. The former middleweight champ was an adviser on the film and De Niro was able to become LaMotta by talking to the man and also by reading LaMotta’s own words about his tortured life. And of course De Niro trained as a boxer for the role. And he lived with Joe Pesci so the two would feel more like brothers. And De Niro put on 60 pounds of real weight to play the older version of LaMotta. Method acting became a household term after this film was released. Truly De Niro became LaMotta physically and emotionally and it all came together on the screen in the most incredible way.

Raging Bull was voted the best film of the 1980s by numerous news outlets and film critics and I’m not going to argue with that ranking. Is it the fourth best American film of all time? I don’t know, but I certainly can’t argue about its inclusion in the top 10 of the AFI list. It is definitely one of the best American films ever produced, if for nothing else than De Niro’s Oscar-winning performance. But it’s so much more than that. Any discussion of Raging Bull has to give credit to Martin Scorsese, who I’ve already said on this blog is in my opinion one of the top two or three directors in American film history and you could argue Raging Bull is his masterpiece. Scorsese did not win best director for Raging Bull — it wasn’t until 27 years later that the Academy honored him for directing with his win for The Departed. A great film that won Best Picture but in my opinion it’s great but not as good as Raging Bull. Scorsese captured the emotion of LaMotta’s life, but also created a mood that makes the viewer feel like he or she is watching a film made in the 40s and 50s. He does this primarily through the use of black and white, but he also selected a hauntingly beautiful score to add to the tone. The brutality of the boxing ring was captured wonderfully through delicate choreography and find makeup work. The team used chocolate syrup as fake blood to find the perfect consistency knowing in black and white it would work perfectly.

The film also featured tremendous supporting performances by Joe Pesci and Kathy Moriarty, both of whom were nominated for acting Oscars. It was one of Pesci’s first movie roles and it was a clear indication of things to come. Pesci lost to Timothy Hutton of Ordinary People and for my money that will go down as one of the worst Oscar snubs ever. In fact, Ordinary People beat out Raging Bull for Best Picture and Robert Redford took home the Best Director statue for the film. I have nothing against Ordinary People — it’s a nice film with good performances. But note that it isn’t to be found on the AFI Top 100 and Raging Bull came in at number 4 all time. Oscar clearly had its head up its ass in 1981!

I think Raging Bull is one of the best films ever made. It’s not one of my favorites, but artistically and performance-wise it is incredible and worthy of its place in history.