“I don’t feel we did wrong in taking this great country away from them, if that’s what you’re asking. Our so-called stealing of this country from them was just a matter of survival. There were great numbers of people who needed new land, and the Indians were selfishly trying to keep it for themselves.” — John Wayne, 1971

I’ve never been a fan of John Wayne. I find his real life persona so despicable (see the above quote for example) that I can’t get past it when I see him in films. So I was not looking forward to screening The Searchers, which is considered by many critics to be not only a great Western but one of the best films in American cinema history. After seeing it today, I have one thing to say: poppycock! 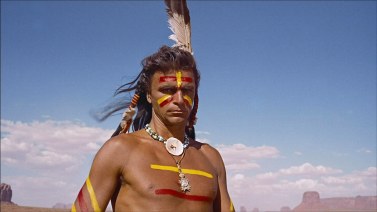 I have never had such a visceral reaction to a film in my life. Yes, I was biased from the git-go given my feelings toward the Duke, but I don’t know how anyone can watch this film and not think it’s one of the most racist films ever shot. The story is simple. A Civil War veteran (Wayne) returns home to the Texas territory just as a band of marauding Comanche Indians ransack his family home, kill the adults and steal the women. Wayne then spends the rest of the film hunting down the tribe who killed his relatives to seek revenge and retrieve his niece. I get that this film was shot in 1956, but for me that doesn’t excuse the blatant racism and vitriol spewed from Wayne’s mouth regarding the Native Americans. It’s quite disgusting really, especially when you consider Wayne’s real life racist rants about Native Americans and other minority groups. The film treats the Comanche tribe as if they are subhuman, going so far as to imply that the women who are taken by the tribe “go Injun” to the point that they are no longer human or even worth bringing back into society. I seriously couldn’t get past the racism to make a decision as to the artistic merits of the film.

I have read some meaty reviews and commentary about The Searchers. Scorsese thinks it’s a great film. Academic papers have been written on John Ford’s technique and the subtext of the plot relative to one man’s search for something (in this case his niece). Supposedly it influenced a lot of today’s great directors and paved the way for great films like Dances With Wolves. Maybe that was Ford’s point — to make a Western in which white America’s hatred and disdain for the Native Americans is portrayed in all its ugliness and that was his commentary. If that’s the case, why is there no realization by the characters that their racism is wrong? Dances With Wolves is a tribute to the Native Americans of the same time period. It’s a much better film than The Searchers yet it didn’t even make the AFI list.