It’s graduation season and that means graduates around the country are being ushered off into the world with a never-ending series of clichés about the future. Take the Road Less Traveled. The World is Your Oyster. Oh the Places You’ll Go. Be Less Afraid. The Future Belongs to Those Who Believe in the Beauty of Their Dreams.

Great advice…that hardly anybody ever takes. The vast majority of people do exactly what’s expected of them. They graduate from high school, go to college, get a job, slave away for 50 years until retirement, then shuffle off this mortal coil. I think people take the road most traveled because they are afraid of the unknown. The common path is predictable and safe and nobody can fault you for following the herd. Unfortunately, that leads to a life that resembles another famous quote — Most Men Live Lives of Quiet Desperation.

I’m not one to talk. I played by the rules, went to college, and then worked in a series of not very fulfilling  jobs. It was only by accident that I veered off path, thanks in some part to a major health crisis followed by an ill-advised move to California. Frankly, I think my journey has been more about serendipity than anything I planned. But hey, I’ll take it. I’m finally really happy in life and hopefully I still have some time left on this earth. 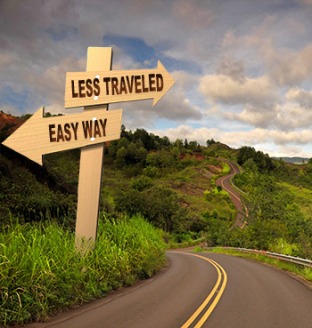 I bring this subject up because it’s graduation season, true, but it’s also the start of what looks like is going to be the last summer Leslie and I will have with Connor at home. And ironically, it is this particular 18-year-old who continues to teach me about life. It was supposed to be the other way around! As I said, most people don’t realize they are living an inauthentic life until they are in their 30s or 40s and decide to make a change — at a time when change is perhaps most difficult. This summer Connor has taught me to think hard about the choices I made in life and question what motivated those choices. In fact, I’ve been boasting about my life-changing decision to go to work for a nonprofit all while I’ve been questioning his motivations for doing what he wants. What a hypocrite I have been. He is choosing to take the road less traveled for real, at age 18, and rather than be concerned I should be thrilled for him. Instead I have been wary…but that changes today.

Connor, I am proud of you for following your bliss even though it flies in the face of so-called mainstream decisions. It took me until my late 40s before I did something controversial, and here you are at 18 going for it. You truly are an inspiration to me and I respect you immensely. It doesn’t matter what I did when I was 18. It doesn’t matter what most people do when they are 18. What matters is that you do what you want to do. And even if it doesn’t work out, I’m proud of you for trying. Now is the best time to try new things because you have plenty of time to adjust your path. You have nothing to lose and everything to gain.

One thing I can say I’ve learned in my 50 years is that you never know what life is going to throw at you. Here’s a popular quote that I actually like: Life is what happens to you while you’re busy making other plans. If you are graduating from high school this month, or college, do me a favor and don’t listen to your parents. Don’t go to the local college because it’s what everyone else in your class is doing. Don’t take the job because it’s safe. Take a gap year. Travel abroad. Go work on a farm. Move in with your boyfriend or girlfriend. Start an alternative rock band. Work for a cause.

Or do what Connor is doing after one year at ASU — drop out, go to work for yourself, and follow the love of your life across the country. You have the rest of your life to wonder what if.