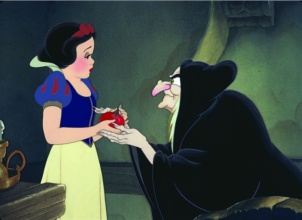 Really AFI? Just because something was the first does not mean it’s the best. Snow White and the Seven Dwarfs is indeed Disney’s first full-length animated feature, but it doesn’t belong on a list of best American films. At No. 34 on the list is it, according to AFI, the best American animated film ever. It was one of only two animated films on the list (Toy Story came in at No. 99). Frankly, I can think of plenty of superior animated films. Does Snow White deserve credit for being the first? Sure. Was it artistic for its day? Absolutely. Does the story have staying power? Yep. Is Disney a marvel of promotion and advertising to kids? Duh.

Dear Disney fanatics, please don’t yell at me. I like Disney. I know you loved Snow White when you were a little girl and your own daughter now loves Snow White. I get it. I really do. Just don’t try to tell me the film is better than Shrek, or Finding Nemo, or The Lion King, or The Prince of Egypt, or The Little Mermaid, or Ice Age, or Heavy Metal!

Believe me, I can get into a whole analysis of Snow White and we can discuss its impact and we can even get into themes like the Prince Charming fallacy and other feminist stuff. Save it for a different blog. This is about enjoying movies and I fell asleep watching Snow White today. Whistle on that while you work!

Next Up: One Flew Over the Cuckoo’s Nest

One thought on “AFI #34: Snow White and the Seven Dwarfs”