“I feel that life is divided into the horrible and the miserable. That’s the two categories. The horrible are like, I don’t know, terminal cases, you know, and blind people, crippled. I don’t know how they get through life. It’s amazing to me. And the miserable is everyone else. So you should be thankful that you’re miserable, because that’s very lucky, to be miserable.” — Alvy Singer (Annie Hall) 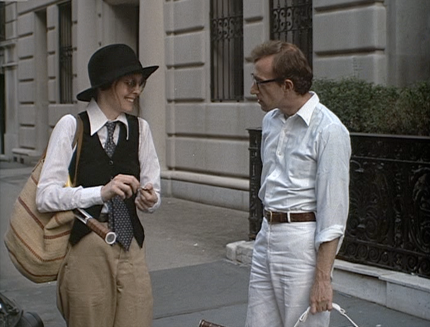 Before we get into my review, we must first get past the elephant in the blog — Annie Hall is my all-time favorite film. I know there are two kinds of people in the world, those who hate Woody Allen and those who love him. I consider Woody Allen to be one of the three or four best directors in the history of film, right up there with Alfred Hitchcock, Marty Scorsese and Spike Lee. If you don’t agree, you’re an idiot. 😉

Annie Hall is the perfect romantic comedy and what makes it perfect is that it does not have some sappy unrealistic ending. Instead, it takes the viewer through the roller coaster ride that is love and in the end, at least for Alvy Singer and Annie Hall, that does not mean they end up living happily ever after but rather they learn and grow from their relationship and have a heck of a time along the way. But beyond the realistic look at love and relationships, Annie Hall is brilliant because it is one of the best written films ever. The screenplay is literary perfection, with not a word wasted. Every utterance, every throat clearing, every line is perfectly placed and leads to the next great line. It is, from beginning to end, a masterpiece of the written word. And on top of that, each line is delivered wonderfully by Diane Keaton and Woody Allen and Tony Roberts and the rest of the great cast from Christopher Walken to Shelley Duvall to Paul Simon and everyone in between. Hell, even Jeff Goldblum gets to utter a classic line (his first on film) — “I forgot my mantra.”

Annie Hall was a turning point for Allen, who previously made slapstick films like Bananas and Sleeper. Annie Hall showed Allen’s mature side, and began a string of amazing adult comedies and dramas like Manhattan, Broadway Danny Rose, Radio Days and Hannah and Her Sisters. He hasn’t slowed down and while he’s made a few clunkers he has, like no other, churned out a plethora of great films — he’s currently directing his 48th title. Perhaps the only thing more impressive than his writing and directing career is the parade of amazing actors who have lined up to work on his films. But of all the great actors he has worked with over his career, Diane Keaton remains his best and most loyal muse. Keaton’s performances in Woody’s films are glorious and none is better than Annie Hall herself. Keaton is beautiful and tremendous in the film, which was essentially written for her by Allen (Keaton’s real name is Diane Hall). She took home an Academy Award for best actress for her portrayal, and even sparked a generation of women to dress like her character who was famous for wearing men’s shirts and ties.

Keaton is the perfect straight man for Allen’s Alvy Singer, easily his most autobiographical character. Alvy Singer is a striking self-analysis by the director. He is obsessed with death, has a difficult time with relationships, is tormented by his upbringing, distrusts everyone, thinks the whole world is anti-Semitic and defends himself with self-deprecating humor. He is not afraid to look at himself with a critical eye, which makes the film incredibly honest and revealing.

“The… the other important joke, for me, is one that’s usually attributed to Groucho Marx; but, I think it appears originally in Freud’s “Wit and Its Relation to the Unconscious,” and it goes like this – I’m paraphrasing – um, “I would never want to belong to any club that would have someone like me for a member.” That’s the key joke of my adult life, in terms of my relationships with women.” — Alvy

I could go on for hours sharing the many wonderful lines in Annie Hall…hell the whole film is one amazing line after another. But you get the point. Annie Hall is a brilliant film and it will always have a special place in my life. The film of course won the Academy Award for best picture in 1978 and Allen (along with co-writer Marshall Brickman) won a best screenplay Oscar. Allen also won for best director, and was even nominated for best actor. I know Allen has had a strange life, especially his tumultuous relationship with Mia Farrow and her adopted daughter Soon Yi (with whom he has been married since 1997). Is that weird? Yes. Is it illegal? No. Is it immoral? Perhaps. Still, his personal life aside Woody Allen is and always will be one of the world’s greatest filmmakers. And Annie Hall is his masterpiece.

Next Up: Snow White and the Seven Dwarfs