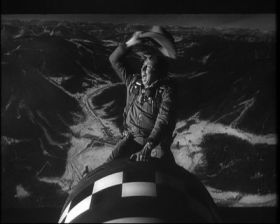 I’m about to piss off some movie fans, so here goes: Dr. Strangelove is terribly overrated! It’s 95 minutes of unintelligible silliness with a handful of comic gems sprinkled in. It’s certainly not the greatest black comedy of all time and it definitely does not belong on the AFI list of best films ever. There. I said it!

I certainly like the theme of the film. If you’ve never seen it, basically it’s about what would happen if a rogue general launched a nuclear sneak attack on the Soviet Union (circa 1964) as the cold war is in full swing. And it’s “dark” because it is both comic and all does not end well for planet earth. It must have caused quite a stir in 1964. But for me it was ultimately disappointing. That being said, here are some things I liked:

Dr. Strangelove suffers from what many of the films on this list suffer from — memory tricks. We remember the film being so great because we remember the highlights but forget about the entire film. Ask anyone about Dr. Strangelove and they’ll surely recall the Slim Pickens bomb scene or Dr. Strangelove trying not to give the Nazi salute. But beyond those “gags” there is very little in the film which provides genuine laughter. I mean it. See it again if you don’t believe me.

A word about director Stanley Kubrick. He is easily the most overrated film director of all time. In my opinion he made four solid films: A Clockwork Orange, The Shining, Spartacus and Full Metal Jacket. The rest are overrated or flat out suck.

Next: The Treasure of the Sierra Madre.

2 thoughts on “AFI #39: Dr. Strangelove or: How I Learned to Stop Worrying and Love the Bomb”