It’s funny to me that such a great Western with so many memorable moments and themes is best remembered for a line that really was just a throw in to the plot. But you remember the line, even if you think it’s from Blazing Saddles. “Badges? We don’t need no badges. We don’t have to show you any stinking badges!”

The Treasure of the Sierra Madre is a great Western, even though it takes place on Mexico which isn’t exactly Texas. It’s a story as old as time with a theme around what greed can do to a man when he’s desperate. Ironically it’s the same theme of director John Huston’s first great film, The Maltese Falcon. Like the famous Bogart line in that film, when Bogie is asked what the falcon is and he replies “It’s the stuff that dreams are made of.” So too is gold, the stuff that dreams are made of in The Treasure of the Sierra Madre. It’s the story of down and out Fred C. Dobbs, who finds himself in Mexico scraping by on borrowed pesos. When Dobbs meets Curtin, another American in the same situation, the two uncover a “dream” in a tale of gold told by old timer Howard. Together the threesome set off on an ill-fated adventure to dig for gold in the Mexican mountains where they fight bandits and fight each other for control of the stake.

But really the theme of Treasure is greed, and how different men react to the potential for riches. Howard and Curtin seem to have a good attitude about the strike, happy to take enough out of the ground to ride off rich. But Dobbs wants more, and then his mind starts to run away from him with bouts of paranoia and fear that ultimately lead to his demise. Humphrey Bogart plays Dobbs and he’s a nasty little bugger who is definitely hard to like. While Curtin and Howard seem like decent guys, Dobbs thinks the world is out to get him and at the same time he deserves the riches coming to him. It’s a different role for Bogart, playing the loser if you will. Dobbs is pretty much the opposite of Casablanca’s Rick Blaine. It says a lot about his acting abilities frankly…the viewer really doesn’t like Dobbs!

Treasure is really Walter Huston’s masterpiece though. He won a Best Supporting Actor Oscar for his portrayal of Howard, who is a little bit crazy but just sane enough to keep things honest, have a good perspective and stay alive. He also seems to understand the power that riches can bring and the trouble that greed can bring, likely because he’s experienced it all before. The old timer steals the film and is as lovable a character as you’ll find in a film. Huston is an under the radar actor who was nominated for three other Best Actor Oscars! But Howard is his triumph and a role for history. Kudos as well to the great Director John Huston, who delivered so many great films over his career.

Treasure is one of seven “Westerns” on the AFI list and only The Searchers and High Noon come in higher on the list. That being said, Butch Cassidy and the Sundance Kid is the best Western ever in my book. The Treasure of the Sierra Madre definitely belongs among the greats.

Next: The Best Years of Our Lives

I’m about to piss off some movie fans, so here goes: Dr. Strangelove is terribly overrated! It’s 95 minutes of unintelligible silliness with a handful of comic gems sprinkled in. It’s certainly not the greatest black comedy of all time and it definitely does not belong on the AFI list of best films ever. There. I said it!

I certainly like the theme of the film. If you’ve never seen it, basically it’s about what would happen if a rogue general launched a nuclear sneak attack on the Soviet Union (circa 1964) as the cold war is in full swing. And it’s “dark” because it is both comic and all does not end well for planet earth. It must have caused quite a stir in 1964. But for me it was ultimately disappointing. That being said, here are some things I liked:

Dr. Strangelove suffers from what many of the films on this list suffer from — memory tricks. We remember the film being so great because we remember the highlights but forget about the entire film. Ask anyone about Dr. Strangelove and they’ll surely recall the Slim Pickens bomb scene or Dr. Strangelove trying not to give the Nazi salute. But beyond those “gags” there is very little in the film which provides genuine laughter. I mean it. See it again if you don’t believe me.

A word about director Stanley Kubrick. He is easily the most overrated film director of all time. In my opinion he made four solid films: A Clockwork Orange, The Shining, Spartacus and Full Metal Jacket. The rest are overrated or flat out suck.

Next: The Treasure of the Sierra Madre. 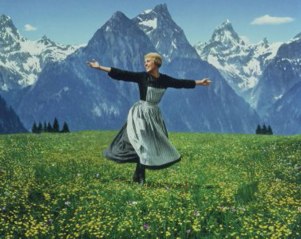 Sixty movies into this journey of watching all of the AFI’s top 100 American movies in order and if you’ve been reading my posts by now you know I am not a fan of musicals. The good news is, there are only three musicals left on the countdown. The bad news is, I had to try to watch The Sound of Music again — and truth be told I couldn’t take it!

I get it. If you like musicals, this is the creme de la creme. Still, there are “modern” musicals like Evita and A Chorus Line, both of which were made into extraordinary films that I loved. I’m very much looking forward to the upcoming film version of Les Miserable. But Rogers and Hammerstein is not my cup of tea. But I don’t disparage you for liking them and I certainly understand the appeal of The Sound of Music. It won Best Picture in 1966 over Dr. Zhivago (another terrible slight by the Oscar voters), but how can you argue with Julie Andrews singing and the Von Trapp kids dancing around like wooden soldiers? 🙂

The song list from this film is truly impressive. The Sound of Music, Edelweiss, Do-Re-Mi, My Favorite Things, Maria, So Long Farewell. Good stuff and probably the greatest collection of musical favorites in a single show. Julie Andrews is wonderful as Maria (although I’m not sure why she always seems to play a nanny)! And the World War II background with the Nazis and the family having to escape Austria is interesting and keeps the film from being a total waste of time (like that other Rogers and Hammerstein trash including Oklahoma, Carousel, South Pacific, et al). I know — sacrilege! Look, I’m just being honest. I don’t care for schmaltz.

Very excited to move on to the next few films on the list. Next up: Dr. Strangelove