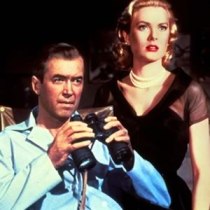 The second Alfred Hitchcock film so far on the AFI Top 100, Rear Window stars Jimmy Stewart as a professional photographer who is laid up with a broken leg with nothing to do but spy on his neighbors out his window. When he thinks his a neighbor has killed his wife he tries to put together the story along with his girlfriend, his nurse and a detective friend. The result is really less of a suspense film and more of a commentary on society.

In terms of suspense the film is a little slow and not nearly as action packed as other Hitchcock films like Psycho, North By Northwest or The Birds. But I enjoyed it for its statement about human nature. Stewart’s character Jeff watches over his neighborhood and judges each neighbor. There is “Miss Lonelyhearts” who dines with imaginary friends, and the songwriter who struggles with his art but throws parties with lots of people. There are the newlyweds and of course “Miss Torso” who dances around in her underwear and appears to have many men chasing after her. But of course Jeff becomes obsessed with the salesman, Mr. Thorwald, who slaves over his ill wife until one strange night she seems to have disappeared. Jeff watches Thorwald’s strange behavior and rushes to the judgement that he has killed his wife.

Frankly I’m not sure why Rear Window is considered a great film by so many, including the AFI. Aside from the interesting characters in the apartment complex it’s a pretty silly film, especially the end in which Thorwald goes a little crazy. The whole premise that Thorwald would kill his wife with the shades open and then continue to prance about his apartment packing up her belongings is far-fetched. So too is his reaction when Jeff lets him know that he is on to his scheme. Thorwald’s behavior is so unbelievable that it borders on ridiculous.

On the other hand, Jimmy Stewart does a nice job as Jeff. His character has the best lines (along with the sharp-witted nurse). On top of that, any film with the gorgeous Grace Kelly is worth watching. Still, Jeff doesn’t seem to want to marry Grace so he’s really not that bright after all.

Next Up: A Streetcar Named Desire