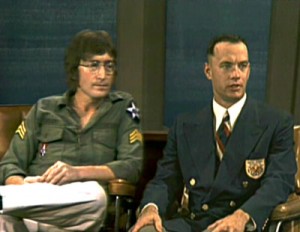 There’s nothing quite like watching a great film with someone who has not seen it and so watching Forrest Gump with my son this morning was like watching it for the first time. I remember when I saw Forrest Gump for the first time how I sat there after the film ended with my mouth agape and a feeling like I had just experienced something magical. Connor turned to me at the end and said it was the second best movie he’s ever seen (nothing will ever replace Scott Pilgrim Vs the World for him). Only a truly great film can make an impact like that across a generation and Forrest Gump is undoubtedly a great film.

I think what makes Forrest Gump so universally loved is that Forrest sees life through the eyes of a child and all of us can appreciate that. In fact, I’d argue the world would be a better place if we all remembered to look at life in this way more often. It’s also a very funny and touching film. The little gags throughout all add up to a brilliant script. I thought Connor was going to go through the roof with laughter when Forrest gets rich because Lt. Dan invested their money in “a fruit company” that was actually Apple Computer. Or when Forrest is running and he steps in dog crap and that inspires the bumper sticker manufacturer to come up with “shit happens.” Or when Forrest learns his mama is sick and he jumps off the boat and runs straight home to Alabama. Great gags throughout. Of course it’s touching as well, like when Forrest gives half his fortune to Bubba’s family or when he takes care of Jenny while she is sick from AIDS. The tear-jerker of course is when Forrest realizes little Forrest is his child and he worries that the child is dumb like he is.

The film is easily one of the all-time greats. It won Oscars for Best Picture, Best Actor for Tom Hanks, best Screenplay, Best Director and of course Best Visual Effects. In fact, it is the visual effects that really set the film apart. The way in which Director Robert Zemeckis weaved Forrest into real historical footage was revolutionary and mind-blowing when you see it for the first time. Best moment: when Forrest drops his pants to show President Johnson his bullet wound! And then the magic of Gary Sinise without legs is still amazing all these years later. The effects are cool, but credit has to go to Sinise for acting as if his legs were gone as well. Brilliant, and of course it earned him his first Oscar nomination.

Watching Forrest Gump is always a treat and it never gets old. A very special film!

Next Up: In the Heat of the Night