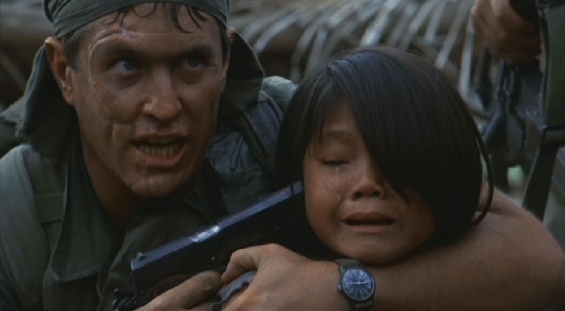 It’s funny, but 25 years after seeing Platoon the first time I had the same reaction to it watching it today — why did so many people like this film? You can’t “like” it as much as you can simply experience it. It’s 120 minutes of blood, guts and confusing combat scenes with very little plot. Yes, there is the subplot of Charlie Sheen’s character Chris Taylor trying to deal with the injustice of war and the sheer lawlessness it brings. There is a little “right vs wrong” subtext during scenes like when Kevin Dillon’s character smashes in a villagers head for no reason and when members of the platoon start to rape a woman until Sheen stops them. And there is the whole bit with Tom Berenger’s character killing Willem DaFoe’s character and Charlie getting even later on. But all that was small potatoes to what I think Oliver Stone was trying to express with Platoon — war is no way to resolve a dispute.

If you want a war movie about right and wrong check out 1989’s Casualties of War with Sean Penn and Michael J. Fox. But if you want 120 minutes of feeling depressed and questioning the value of war then Platoon is for you. With Platoon Stone gives us a taste of war that the American film-going public hadn’t really seen before. Previous war films were stories of heroism and bravery, with great battles and selfless acts. No, Platoon is not that kind of war film. I believe Stone made Platoon to rub our faces in war, to show us the ugliness and to in some way make us question war as a political weapon. It was his first big movie and he deals with the issue at the top of his mind in the Vietnam War, but it was just the first of many films for Stone in which he questions the moral authority of government, corporations and politicians (Wall Street, Born on the Fourth of July, JFK, W., and others followed). Stone makes us think, and that’s what I did after watching Platoon again.

I don’t believe in the concept of a just war. I definitely don’t believe in the Bush Doctrine of preventative war. As I was watching Platoon I began thinking about the Iraq war and the war in Afghanistan and how Americans have learned nothing from our past failures in war. We didn’t accomplish anything in Iraq and we certainly haven’t accomplished anything in Afghanistan. War should be used only as a last resort and then only when we are attacked. I think Oliver Stone made Platoon to say just that. I suppose that in and of itself makes Platoon an important movie, though certainly not entertaining. It was tough to watch…like real life.

Next Up, something a little lighter! A Night at the Opera.