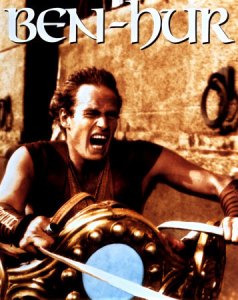 Today we kick off my quest to watch and review all 100 of the American Film Institute’s 100 Years 100 Movies. Some of my friends have asked me why I’m doing this and to them, and you, I answer simply — because I want to. 🙂

Ben-Hur (1959) is the tale of Judah Ben-Hur, a wealthy Jewish resident of Judea during the first century B.C. The long story short is that he is betrayed by his childhood friend Messala and sent into slavery along with his mother and sister. While on a slave ship he saves the life of a Roman Consul who later adopts him as his son and so Ben-Hur returns to Judea to seek revenge on his old friend Messala.

I had not seen Ben-Hur before, so I was actually looking forward to it if for nothing else than to see the famous chariot race scene in context (I’d seen the race plenty of times but never in its entirety). Let’s get this part out of the way first — the race is pretty cool, especially given the special effects technology available in 1959. But by today’s standards it’s pretty campy.

And campy is actually a pretty good word to describe what I thought of Ben-Hur as a film. You know, just because something is old doesn’t mean it’s great and lots of times things from the past aren’t as good as we remember (like Yoo Hoo!) There were so many things I didn’t like about Ben-Hur I don’t even know where to start, but I’ll start with the acting. Charlton Heston was so melodramatic in this role I actually found myself laughing a few times at the most dramatic parts. He won an Academy Award for the role, and the film itself won a total of 11 Oscars including Best Picture. I know acting was different back then, but there are plenty of old movies where the actors don’t overact to the point of ridiculousness. I had a hard time getting past the fake drama. There were a few scenes that I actually found uncomfortable they were so corny, like when Messala and Ben-Hur meet for the first time in the film. They held each others arms far too long and as they gazed into each others eyes I thought for sure they were going to kiss. And there was lots of throwing back of heads and swooning and melodramatic death scenes. Campy I say.

Then there was the plot (Spoiler alert): I think the director, William Wyler, was really confused about what this film was about. The full title of the film is Ben-Hur: A Tale of the Christ. I think the story of Ben-Hur was plot enough to stand on its own, but Wyler throws in several scenes with Jesus that seem completely arbitrary and out of context. As Judah is being led off into slavery, he is given a drink of water by a mysterious stranger whose face we don’t see (but it’s clearly Christ). Later in the film he walks past a bunch of peasants sitting at the feet of a prophet (again, Jesus) but he doesn’t stop to listen. Then there is the end of the film, where Judah goes to witness the crucifixion and returns the favor to Jesus by giving him a drink of water, and then after a great storm he returns home to find his mother and sister miraculously cured from being lepers. Really? What does any of this have to do with the revenge story?  None of this added anything of value to the film, which at 212 minutes could have easily ended with Messala’s death and been a wonderful little revenge tale. I’m not criticizing the film as an atheist…I’m criticizing it as a viewer.

One of the things many people say about Ben-Hur is that it was great simply because of its production value given the time in which it was produced. It cost a ton to make and had more extras than any film in history (I think it still holds that record). But I’m not one to give a movie credit just because it was larger than life. I like a good plot and great acting. And some of my favorite films were extremely low budget. Let’s just say I thought Ben-Hur was mediocre and it wouldn’t make the top 1,000 in my list of top films. I’ll take Gladiator any day over Ben-Hur!